The link between Bruxism (teeth grinding) and Sleep Apnea

Bruxism is a fancy name for clenching the jaw or grinding the teeth. While it can happen at any time of day, it frequently occurs at night. This is called sleep bruxism.  Sleep bruxism can cause people to wake up in the morning feeling tired, with headaches and neck and jaw pain. While Sleep bruxism is a dental problem, it is also considered a sleep related movement disorder characterized by uncontrolled, involuntary physical movement during sleep (in this case, movement of the jaws).

Many health issues are linked to bruxism, such as stress and teeth misalignment, but one of the biggest risk factors is a serious condition called and obstructive sleep apnea (OSA). This occurs when the throat muscles relax during the night blocking the airway and interrupting breathing. The National Sleep Foundation states about a quarter of all people with OSA experience sleep bruxism.

It’s unclear why the two are linked, but researchers believe that arousals caused by upper airway resistance leads to a stress response throughout the body. Once the stress response is activated, your heart and respiratory rates increase while stress hormones flood the bloodstream. Increased muscle activity in the jaw stimulated by this stress response may be a cause for clenching or grinding.

It is known that bruxism rarely occurs alone. Research has consistently shown that bruxism is found more frequently in those individuals who have an existing sleep disorder such as snoring and OSA. Other parasomnias such as sleep talking, violent behaviors during sleep, sleep paralysis, hypnagogic/hypnopompic hallucinations (semi-consciousness between sleep and wake) are also more frequently reported by teeth grinding individuals. 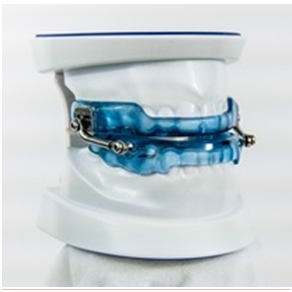 Grinding is the new indicator for obstructive sleep apnea

If you grind your teeth, the new standard of care recommends a sleep study because you are likely having episodes of interrupted breathing during the night and missing out on all the health benefits of deep stage sleep. Even if you’re otherwise healthy, sleep apnea is known to significantly increase your risk of high blood pressure, stroke, cancer, diabetes, depression, and obesity.

So, if you’re grinding your teeth, you should be concerned with two things:

Luckily, managing sleep apnea may help alleviate nighttime teeth grinding. For moderate to severe sleep apnea, the most common treatment method is the use of a continuous positive airway pressure device ( CPAP). This mask, which fits over the nose during sleep, uses air pressure to keep airway passages open, helping to prevent sleep apnea (as well as snoring, which often accompanies the disorder). Studies have found that when patients with both bruxism and sleep apnea use a CPAP, their breathing complications greatly improve and the grinding stops completely.

Learn more about our Oral Appliance Therapy, ApneaGuard with SomnoMed